Komodo Island sounds like something out of Jurassic Park. The thought of walking silently on an island filled with man-eating dragons, holding only a trident as a weapon, evokes a scene in Indiana Jones.

While backpacking through Indonesia, I met a few people who told me about a four-day boat ride from Lombok to Komodo Island. The fact that I only heard bad things about it (shipwrecks and scams) made it all the more adventurous, exciting and appealing to me. In one blog post, a travel writer who was paid to go on the Perama boat tour and write about her experience ended up being shipwrecked. Read her story here, there was even a two-year-old baby on board!

I decided to avoid booking with Perama and instead booked with Wanua Adventures because they received the highest recommendations on Tripadvisor. While booking the trip I asked the agent how often the boats sink, “no problem, the boat won’t sink. Very safe.” I’ve come to realize that “no problem” is the most commonly used phrase in Indonesia, used mostly when things are a problem. Eventually, he said, “if boat has troubles, you are always close to the shore.” Actually, this was comforting to hear. In case the boat did sink, although unlikely, at least I wouldn’t have to swim too far to safety. Phew!

Summary:
♦ Costs 1.8 Million Indonesian Rupiahs/ about $170AUD (might also be able to get it for 1.5-1.8 IDR depending on your haggling skills)
Includes:
♦ 3 nights accommodation on a foam mattress on deck (+500,000 IDR to sleep in cabin)
♦ 3 meals a day + free flow coffee/tea
♦ 6 bottles of water per person for the duration of the trip
♦ Mask and snorkel
♦ Entrance fee to Komodo and Rinca island (*make sure to tell your agent to write this on your receipt – otherwise you may be asked to pay entrance)
♦ Bring: snacks, books, seasickness medication (just in case), baby wipes (no shower on board) and fins

Day 1: 8am pickup from the travel agency in Senggigi. The shuttle bus picked up each person from their hostel and drove us to Bangsal Ferry Terminal where we were all dumped at a restaurant to wait for about three hours. No one had any idea what was going on which is typical. It turned out to be a good opportunity to get to know the group of people I’d be spending the next four days on a small boat with. There was a couple from the Netherlands who were both doctors and a Canadian from Quebec City who was a med student. There was also a rescue diver and a police diver. Needless to say we were good hands. Finally, at around 1:00pm we went aboard the sail boat and everyone bolted to the deck area to claim their beds. Unfortunately, I had the bed right in front of the stairs and had the pleasure of people stomping on/or sitting on my legs while they contemplated going down the stairs throughout the night and morning.

Tip: Try to get on board first to get a good bed, not by the stairs.

A few hours after setting sail, we made it to our first stop to Sugian Island. The captain anchored the boat and told us to jump out and swim to shore. It was so cool to dive off and explore such a remote and unpopulated island. It had jet black sand from volcanoes, first time seeing that! Dinner that night was tofu, tempeh, cooked cabbage and rice. If you require lots of food to feel full, bring lots of snacks. There were never leftovers after meals. While we were finishing eating the captain told us to go to sleep because we had to be up and ready to go by 6am (this caused a lot of jaw-drops). Within minutes, all the lights were off and everyone reluctantly scampered off to bed. I normally go to bed quite early but this was pushing it a bit. So before racing off to the cramped sleeping quarters, I sat on the deck with my legs dangling off the edge and looked up at the night sky. As you can imagine, it was absolutely incredible. Like thousands of sparkling diamonds on black velvet.

Day 2: The next morning we rose at 6am, watched the sunrise and made our way to Moya Island for a morning waterfall trek. We were served a single banana pancake for breakfast, jumped off the side of the boat and swam to the island. The waterfall was nothing special but it was nice to wander around the island and get a “massage” from the rushing water. Every other boat tour takes the exact same route so there were clogged lineups getting to the waterfall which kinda killed the experience a bit for me. After this, we had lunch (tempeh, tofu, cabbage, and rice) and then went to Satonda Island for some snorkeling. The captain then summoned us all back to the boat and explained that we needed to cover some serious ground and sail for the next 18 hours. It ended up being 23 hours of intense rocking back and forth because we were in the middle of a storm. Needless to say, only a handful of us ate dinner. The rest of us sat silently with a greenish hue, gazing out at the horizon. It was difficult to sleep as I kept wobbling from side to side. Whenever I did drift to sleep I was awoken by a nightmare that I would roll off the boat in the midst of the night, never to be seen again. 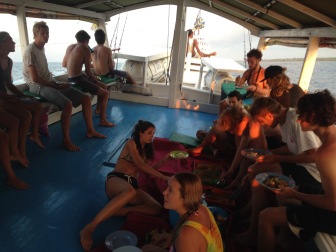 Day 3: By the time we arrived at Gili Laba island everyone was ready to jump off the boat before it was anchored. 23 hours was enough of boat time. When we reached the shore the whole mood lightened. Especially since Gili Laba is one of the most beautiful islands I’ve ever seen, it genuinely looked like something out of a movie. We hiked around for about an hour then made our way back to the boat to snorkel alongside ginormous mantas (up to 5 meters long!) Everyone on the boat told me this was the part they most looking forward to. I didn’t even know it was part of the trip. There was a strong current here (mantas enjoy floating with the current) so it was a tougher swim than normal. Unfortunately, we saw a total of zero mantas. I was so busy trying to swim against the current and get water out of my snorkel to realize that almost everyone was already back on the boat. When I swam back to the boat, disappointment was all over their faces as they explained that it was too hard swimming with the current and there were clearly no mantas anyways. I felt like we gave up a little easy on this one.

Next, we headed to ‘Pink Beach’ which actually should have been called ‘slightly pinkish hue beach.’ We then sailed to a port and were told that it was party night. Woohoo!!! Party time, excellent. While the sunset everyone cracked open the remainder of their Bintangs and we all squeezed to the front of the boat, enjoying the smooth waters and breathtaking views. Suddenly, as if on cue, a pod of cute little dolphins made an appearance, playing and jumping near the boat, causing everyone to squeal in delight. Everything was so perfect it felt surreal. It made me so incredibly happy. I don’t have a single photo of this because my phone was upstairs near my bed and I didn’t want to miss the show. I think not trying to get the perfect shot made the moment even sweeter. 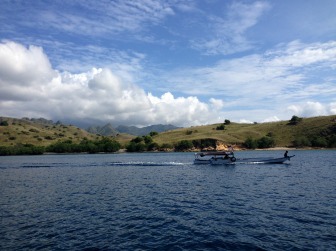 Day 4: Komodo Island day – finally the day we were waiting for! We woke up early, watched the sunrise, ate our banana pancake and made our way to Komodo Island. I was so excited I could hear my heart beating! Upon entering the island we were met by two guides, each of them held a forked stick to protect us from the dragons. They explained the safety procedures which were to stay in the group, keep quiet and listen to the guides. It really felt like a scene in Jurassic Park. We then trekked for about 20 minutes through the jungle, watching deer quietly pass by (a komodos favorite meal) and then saw two komodos basking in the sun. They didn’t look threatening in the least. We all took pictures and stared in amazement. It really was quite an experience to be so close to such a dangerous animal with nothing separating us. The tour didn’t last as long as I figured it would as before I knew it we were guided to the tourist area where people tried to sell us Komodo t-shirts and necklaces.

The next spot was Rinca Island, I read a lot of blogs saying that Rinca was better than Komodo Island because it was wilder and less touristic so I was really looking forward to it. After we all got on the boat the captain had an announcement to make, we weren’t going to Rinca Island anymore because they “ran out of money.” After clasping his hands and ending his sentence with “you get it? No Rinca, we go snorkel instead.” We all stared at each other confused. It was hard to believe they had run out of money and only found out about it now. Clearly, they wanted to pocket the entrance fees and hoped we weren’t too bothered about it. This angered a lot of us and after a lot of discussion, everyone on the boat demanded we go to Rinca even if we have to pay the entrance fee (50,000 each). After eye rolls and muttering things under his breath the captain agreed and somehow the entrance fee money magically appeared. Rinca Island was indeed far cooler. The entrance was further in the island and we passed by gangs of huge monkeys who bared their teeth at us and growled as we walked by (I was more terrified of the monkeys than the komodos). The tour guides on the island were a lot more laissez fair and joked the whole time. They also told us the anecdote for a Komodo bite was located conveniently in Bali (they were serious). We then went back to the boat for our final meal which was perfectly cooked tuna, veggies, and rice. We then stopped for our last and final swim. We all had fun individually jumping off, doing backflips and getting go-pro videos of the group jumping off in unison. We were then taken to the final stop, Labuan Bajo. Turns out unless you plan on scuba diving or doing more snorkeling there is not much else to do. I spent the night at the hostel Bajo View, in a hot tent on a foam mattress on the floor. Not the best place after 4 days of being on a boat but I was just grateful to have a shower and be on solid ground.

Bottom line: Do it! It’s only a matter of time before someone gets killed by a komodo dragon (let’s hope it’s not you) and barriers between the dragons will be enforced.

Even if you aren’t too fussed about seeing a dragon, the boat ride alone is worth it. I mean, nothing beats waking up with the sun rising over the ocean, passing incredible uninhabited islands, snorkeling with diverse species of fish, basking on volcanic beaches, watching dolphins swim playfully along the boat and getting an incredible few of the night sky. It’s honestly an incredible, unforgettable experience.